Royal Caribbean’s Symphony of the Seas

Royal Caribbean’s newest ship, Symphony of the Seas, will be the cruise line’s twenty-fifth of the fleet and fourth Oasis Class vessel.  The 6,780-passenger ship will join its sister-ships – Oasis of the Seas, Allure of the Seas and Harmony of the Seas – in the Spring of 2018.  Symphony of the Seas will be Royal Caribbean’s first vessel to combine characteristics of both the Quantum and Oasis Classes.  Presently being constructed in Saint-Nazaire, France at the STX France shipyard, the newest Oasis Class member will sail the Mediterranean out of Barcelona, Spain during the Spring and Summer of next year before repositioning to Miami for seven-night eastern and western Caribbean voyages.

The ship will become the largest in the world at 1,188 feet long, 215 ½ feet tall, just about as high as Italy’s Leaning Tower of Pisa with eighteen total decks and more staterooms than Harmony of the Seas with 2,775 cabins.  The vessel will be highlighted with seven neighborhoods – Central Park, Boardwalk, Royal Promenade, Pool and Sports Zone, Vitality at Sea Spa and Fitness Center, Entertainment Place and Youth Zone.  Although Royal Caribbean has not released details of the amenities onboard specific to the 2,775 stateroom ocean cruise ship, Symphony of the Seas will feature the Ultimate Abyss, a ten-story slide, a trio of water slides which together will form The Perfect Storm, Splashaway Bay, a water park for children, an adult-area with a pool and solarium, AquaTheater at the rear of the vessel, surf simulator, ice skating rink and two 43-feet rock climbing walls. 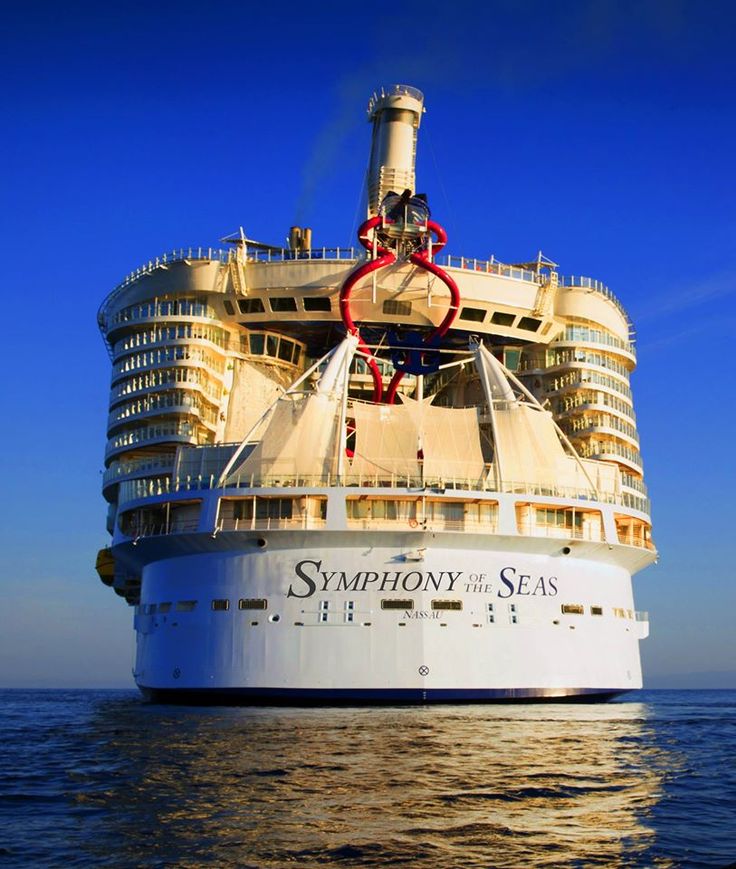 The 2,175-crewed vessel will visit a new port-of-call for Royal Caribbean at Basseterre, St. Kitts which will afford passengers the opportunity to visit neighboring sister-island Navis.  Symphony of the Seas will offer guests numerous complimentary and specialty dining options.  Specialty offerings featuring various ethnic cuisine will include Jamie’s Italian, celebrity chef’s Jamie Oliver’s dining spot, Sabor Taqueria & Tequila Bar with its Mexican-fare, Asian-inspired Izumi and Chop’s Grille, an American steakhouse, are among the twenty options which will be offered onboard.  Bionic Bar with robots serving cocktails will be present along with Vintages wine bar.  Entertainment along with other special additions have not yet been released.  Special Needs Group looks forward to the arrival of the Royal Caribbean’s newest vessel in the Spring of next year.

Celebrity Cruises’ Celebrity Edge, the first of new Edge Class, scheduled to make its maiden voyage in the Autumn of 2018 is being built in the same shipyard as Symphony of the Seas.  The newest Celebrity ship in ten years will eventually be joined by sister-ships Celebrity Beyond in the Spring of 2020 followed by two yet-to-be-named Edge Class members in 2021 and 2022.  Celebrity Edge will be a state-of-the-art $1 billion vessel at sea with a number of innovative features including, “inifinite” verandas and the unique astonishing Magic Carpet. 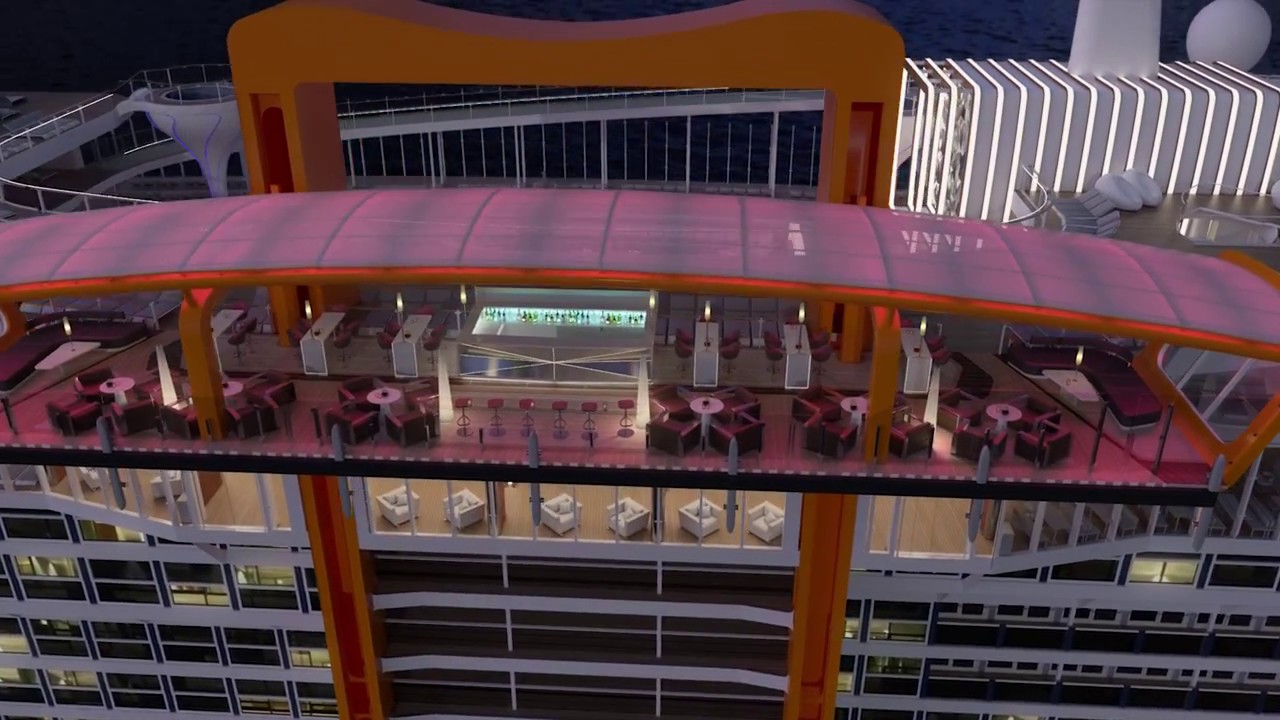 The  Magic Carpet is a deck which moves up and down the edge of the ship along a vertical track; the new public space hanging over the sea, approximately the length of a tennis court, will serve a variety of purposes depending upon which deck it is adjacent to – while on Deck 2 serving as a disembarkation location for tendered ports-of-call, on Deck 5, becoming a luncheon spot with a raw bar restaurant with amazing views, on Deck 14, serving as an extension of the pool area and on Deck 16 turning into a fine-dining restaurant in the evenings.  The Infinite Verandas redefine balconies at sea as the rooms appear to give the illusion of an infinity pool as cabins are expanded right up to the edge of the ship creating a stateroom almost twenty-five percent larger than previous Celebrity ships with bathrooms gaining an extra twenty percent in square footage.  The balcony becomes part of the overall cabin as bi-fold doors can either be completely closed to create a true balcony or left open creating a sunlight indoor space.  The cabin class of 918 rooms also features a floor to ceiling window that can be either opened or closed.  The Infinite Verandas are the first such staterooms on an ocean cruise ship and one of the Celebrity Edge’s cabin classes; one of the classes, specifically for solo travelers, will be a first for the Celebrity line and offer 16-single accommodation staterooms.  The ship will also feature more suites than found on the cruise line’s other vessels which will include a select number offering plunge pools and access to The Retreat.  The Retreat is highlighted by a private sun deck and pool, a lounge serving breakfast along with a daily happy hour and Luminae, a restaurant offering breakfast, lunch and dinner. 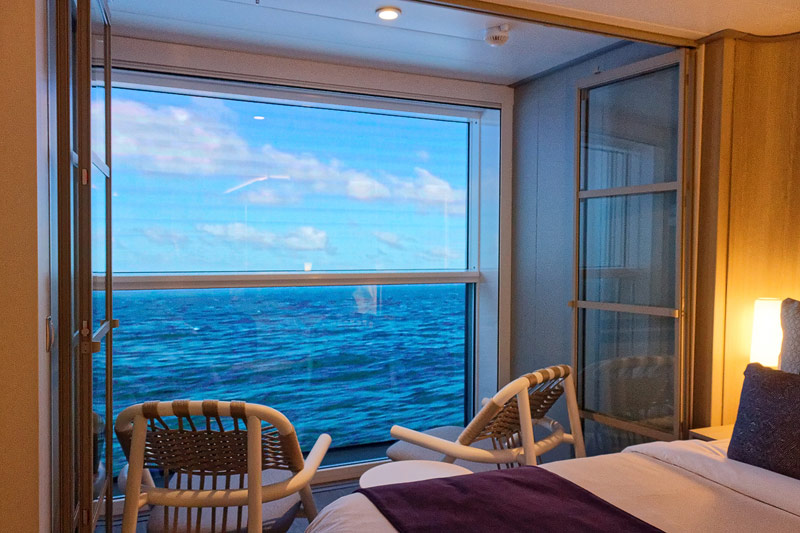 Guests onboard Celebrity’s new ship as well as the other Edge Class ships will be able to do everything from one’s phone on the Celebrity app – checking in, keyless entry by unlocking one’s cabin door and controlling the stateroom’s temperature, window shades and lighting as well as access to the concierge, ship map and its daily event schedule; passengers will also be able to include notifications.

Not all of the vessel’s details have been released, but Celebrity Edge will have an adult-only resort-style deck featuring a Solarium, a glass-domed enclosed pool leading to a rooftop garden with an area for live music one evening and dinner and a movie another night.  The Rooftop Garden combines the Lawn Club found on the top-deck of Solstice Class Ship with the Rooftop Terrace well-liked on Celebrity’s Millennium-class member-vessels.  Although all dining-venues have not been disclosed as with other amenities aforementioned, the Rooftop Garden Grill will offer gourmet burgers during the day and transform into a trendy spot specializing in barbeque in the evenings.  In addition, one of the announced amenities to date includes the Eden Observation Lounge which combines the cruise line’s Sky and Observation Lounges on other of Celebrity’s ships with an added glass-enclosed, garden-like feel.  The three-deck lounge/restaurant will evolve throughout the day as a relaxing getaway for a light lunch during the day to a five course-meal at night for dinner and drinks and then transform into an evening of edgy entertainment.

Tips for Cruising with an Electric Scooter

Traveling can be a wonderful, fulfilling experience that should be stress free and enjoyable. …

Cruisin’: What To Pack

Art lovers will find plenty to admire on cruise ships. Oceania Cruises, for instance, has…