For 10 years, Dania Beach-based Special Needs Group has been helping travelers with disabilities discover more of the world.

Since its founding in 2007, the company’s Special Needs at Sea division has fulfilled more than 150,000 orders for mobility and medical-related equipment from people who want to maintain their independence when traveling.

The company’s mission is to make travel easy, comfortable and accessible for people who require mobility aids or specialized equipment to get around.

Special Needs typically delivers equipment directly to customer cabins before they depart, and arranges for pickups upon the travelers’ return.

Cruise lines typically provide a handful of wheelchairs for boarding and disembarkation purposes or onboard emergencies. Customers with mobility issues are generally advised to bring their own equipment or rent it if needed for the entire trip.

The company is introducing a new product designed by a medical doctor that helps to alleviate acid reflux issues, he said.

“We view ourselves as an empowerment company,” said Garnett. “We want people to go on vacation and have fun.”

Over the decade, customers have repeatedly thanked Special Needs for its services noting that without the equipment, they would not have been able to travel, Garnett said. “They say, ‘because of us, the world is a bigger place’.”

For some of them, it’s almost second nature after insurance to request a motorized scooter or wheelchair, he said.

“Before they couldn’t travel, now there’s no reason not to travel,” Desmarais said. “People are able to do more and don’t have to depend on others to take them where they want to go.”

In part, demand for the services is driven by an aging population, the advent of bigger ships and the cruise industry’s efforts to better cater to people with disabilities, cruise agents say.

“Without a doubt, if it weren’t for the ability to have access to this equipment, they wouldn’t travel,” said Debra Kerper of Dallas-based Easy Access Travel, a franchise agency of Cruise Planners, an American Express Travel Representative in Coral Springs.

As someone who is physically-challenged, Kerper knows firsthand the benefits of having a wheelchair or scooter when traveling.

“Beyond the cabins, it’s important that they can get around the ships and get around the ports,” said Kerper, who has rented equipment from Special Needs for customers for 10 years.

While some cruise lines do a better job than others at accommodating travelers with disabilities, the industry overall has “stepped up to the plate,” noted Kerper, who is a disability advisory board member for cruise lines Royal Caribbean and Celebrity.

Cruise ships carrying passengers to and from U.S. ports are subject to requirements of the Americans with Disabilities Act (ADA) as outlined in the U.S. Department of Transportation’s passenger vessel regulations, according to trade group Cruise Lines International Association.

These regulations prohibit cruise lines from discriminating against passengers on the basis of disability. Their ships and related facilities must be accessible, CLIA said. That also means the the lines are required to make accommodations for passengers with disabilities.

Yet, in recent years, some cruise lines have run afoul of the ADA.

In July 2015, in a settlement with the U.S. Justice Department, cruise giant Carnival Corp. agreed to pay a $55,000 penalty and $350,000 in damages relating to ADA violations by its Carnival Cruise Line, Princess Cruises and Holland America Line brands. The settlement called for accessibility standards and policies to be implemented across the three lines and changes made aboard 62 ships to make them ADA compliant where necessary.

Americans with disabilities spent $17.3 billion on travel in 2015, up from $13.6 billion in 2002, according to a national survey commissioned by Chicago-based nonprofit Open Doors Organization.

This year, Special Needs is expected to deliver its specialized equipment, of which it owns 99 percent, to travelers departing on more than 30 cruise lines in 165 ports across 35 countries. That’s up from 17 cruise lines in 2012 and six in 2007 when the business started.

Over the decade, the number of employees has also grown from one to 30, Garnett said.

In January, sales from its rentals grew 20 percent compared with the same month in 2015, which marked the best month in the company’s history, he noted.

As for the future, Garnett remains optimistic about demand given the industry growth forecast on the horizon.

‘We feel the market is going to continue to grow for us,” Garnett said. “The future is very bright.” 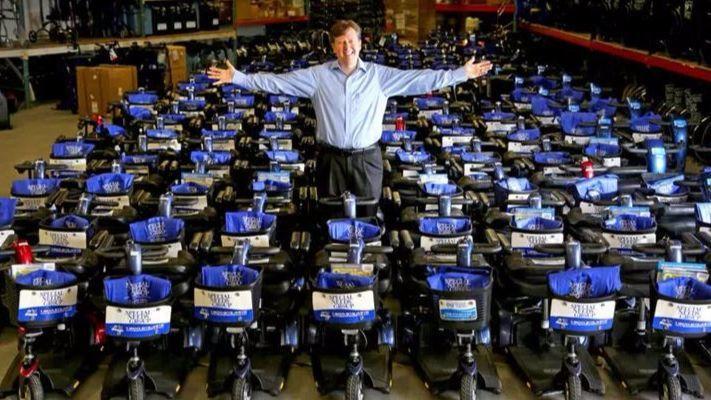 CLICK HERE for original article in the Sun Sentinel