Cruises out of PortMiami sail to the Bahamas, the Eastern and Western Caribbean, Mexico, South America and further locales with transatlantic sailings the first quarter of each year.  Referred to as the “Cruise Capital of the World,” Miami is home-base to five major cruise lines – Carnival Cruise Lines, Norwegian Cruise Lines, Royal Caribbean Cruise, Oceania Cruises and its sister company Regent Seven Seas Cruises.  The world’s leading cruise port services millions of passengers with forty-two ships a year sailing into and out of Miami’s tropical setting; PortMiami offers a view of the skyline of downtown Miami and waters of Biscayne Bay.

Each of the South Florida cruise ports is located in close proximity to nearby airports. PortMiami is less than ten miles from Miami International, and Fort Lauderdale/Hollywood International Airport is just a ten minute drive to Port Everglades.  Each makes for a great South Florida vacation destination prior to and following a cruise.

Miami offers a multi-cultural paradise.  Key Biscayne, the Art Deco of South Beach and Bayside Marketplace are in close proximity to Miami’s port.  Cuban food, music and culture are prevalent throughout the city, especially in Little Havana. Those with Miami wheelchair rentals can visit trendy South Beach, home to Miami’s nightclub, fashion, dining and people watching by day on the beaches and under the florescent neon lights at night, or historical sites such as the must-see Vizcaya Museum and Gardens on Biscayne Bay.  The city is a vibrant one influenced by Caribbean, Cuban, Latin American and a potpourri of cultures offering activities day and night for all to enjoy.

Once the hot-spot for Spring Breakers, Fort Lauderdale has changed its reputation to be a quieter one known more for boaters.  The more family-oriented community these days features 23-miles of beachfront and the canals of the Intracoastal Waterways.  The city’s Riverwalk Arts and Entertainment District runs along Las Olas Boulevard from the beach to downtown offering an array of dining and cultural options, including the Broward Center for Performing Arts.  Each of the South Florida cities is well worth the time to stay before or after one’s cruise or as a destination on its own.

We are pleased to serve the PortMiami and Port Everglades out of “home office” in Dania Beach.  Kiosk service is offered for Holland America sailings out of Fort Lauderdale, for those wishing to pick-up his/her mobility equipment before embarking, located curb-side prior to entering the cruise line’s terminal. Along with Kiosk service providing Holland America vessels with scooter and wheelchair rentals in Fort Lauderdale, SNG presently has a “test” project with Kiosks available for sailings on Royal Caribbean’s Allure of the Seas ship and Harmony of the Seas ship.  While in Miami, Norwegian’s Escape and Getaway provide a similar offering inside Terminal B.  For more South Florida information, contact your travel professional or visit us here. 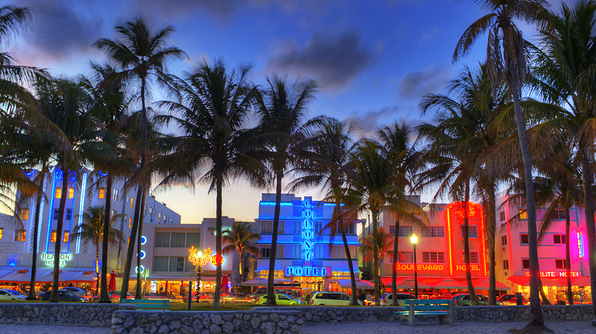